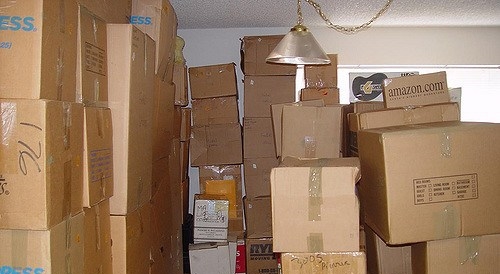 I would be lucky if this photo depicted everything we own. Factor about 12 times this. Okay, maybe 112 times this.

A trailer does not lend itself to living large. Or living with lots of stuff. (It is not even designed to be lived-in for any length of time, but I am a rebel.) What I did not recognize early enough was that I was everyone’s repository for stuff — and what that fact would mean as time passed.

I’ve been acquiring stuff since I was probably 11. The next-door upstairs neighbor was moving and she knew how much I loved Christmas, so when she asked if I wanted her decorations, I checked with Mom and didn’t hesitate. I was now completely outfitted for my favorite holiday, at such time when I had a place to decorate. It all went up in the attic with our own Christmas stuff.

I remember when I first went to college that all my necessities fit into one large Chrysler Newport sedan. That was the only time that happened; subsequent years required multiple trips with said boat-sized vehicle. Moving to my first apartment required a small truck, and moving into my first house required two.

Flash-forward to my second marriage: we arranged to purchase my (now ex-)husband’s grandparents’ house, which came with most of their belongings. Months later, after giving away as much as we could, we still had quite of bit of their stuff that we just weren’t sure what to do with. (I still have some of this. Not sure why.)

Years later, as that marriage ended, I moved into my own grandparents’ house, which was also still completely full. (This is the house we moved from when we came to the trailer.) We gave away or threw out what felt like 15 families’ worth of items. Every floor was full. One by one, the occupants had gone into nursing homes or passed away, leaving it all behind. I won’t bore you with the details about my aunt’s hoarding skills with bags of food — she believed there was only one mouse in the place, so why were ALL the bags moving? — or about how the whole family had lived through the Depression, and so couldn’t bear to throw anything away, ever.

Once the bags of food were dealt with (hundreds — no, thousands — of dollars wasted, dozens of bags placed out each week for the trash collectors), we could tackle the rest. I had just begun dating my lovely Frank, my third and “keeper” husband, at the time. His help with this was immeasurable as we humped bags and boxes out of two living floors, basement, and attic for months. Months.

Only to fill it all back up with our own stuff.

Which is now outside my trailer window in two large storage tents. Since it just WON”T stop raining this year, most of it is now ruined from the constant moisture in the air.

Hi! Welcome to my crazy, chaotic world -- which I've totally embraced and want to share with you! I've changed almost everything in my life over the past 19 months (except my sweet husband, Frank, and my nutty Schipperke, Pip) and I'm happy about it! C'mon along! View all posts by Annette Scavone